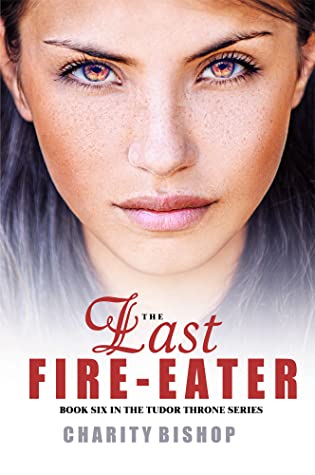 But before we get into my review, here’s a little synopsis:

Davina, a talented fire-eater with a tendency to find trouble, arrives in the ancient city of York on the eve of the princess’ arrival. She’s just in time to witness the rising tensions between the two feuding great houses of the North—the Archbishop of York, and Percy, Earl of Northumberland.

Hundreds of their armed men flood the streets amid the peasants come to celebrate the Tudor princess’ impending marriage to the King of Scotland, and the sparks between them threaten to catch the city ablaze in the fires of wrath and revenge. She and the king’s falconer, Lambert Simnel, get caught up in the violence that threatens to destroy a fragile peace… and it may draw someone’s attention to her that she does not want: Sir Thomas Lovell, the royal enforcer.

Davina has her own reasons to be in York, and her own secrets to hide…

As I say, The Last Fire Eater is my favorite book yet in the Tudor series, dethroning my previous favorite, The King’s Players, Book 3. (Which is still a great story, don’t get me wrong. ;)) This is entirely due to the title character, Davina, the “last fire eater” and a marvelously strong, fierce, formidable female lead.

It’s well known that I have one (1) type when it comes to fictional ladies, and that type is Women Who Could Kill Me. Davina absolutely fits that bill. She’s a fire eater, for gosh sakes. She breathes literal fire. She also has freckles, and dancing eyes, and a slim, boyish build, and looks really hot in her fire-eater’s costume … AND she’s got a dark past, mysterious scars, and a hidden quest for vengeance …

I never stood a chance, obviously. 😛

But Davina isn’t just physically strong and daring. She’s fully in control of her own destiny. She decides what she wants her future to look like, whom she wants to marry–and she charges right ahead and makes it happen. In a historical era where so many women were trapped in arranged marriages or other situations not of their choosing, Davina’s story is a breath of fresh air.

Plus, her romance with Lambert Simnel, the hero of Book 5, The Queen’s Falconer, is so stinking adorable, I can’t even. Lambert is good and precious and supportive, and if any man alive deserves Davina, it’s him. ❤

The Last Fire Eater features the same mixture of lush settings, mysterious, lurking threats, and dangerous escapades fans have come to expect from the Tudor Throne books. It was a five-star read for me, and I highly recommend it.

As is traditional with my reviews for this series, I’ve come up with a list of humorous “incorrect quotes” to help describe the large and varied cast. This time, I actually used an Incorrect Quotes Generator, which has afforded me many hours of hilarious entertainment, and which you should definitely check out.

Without further ado, our dramatis personae:

Davina: “Okay, okay, stop asking me if I’m straight, gay, bi, or whatever. I identify as a freaking threat.”

Lambert: “You wanna see how hardcore I am?” *punches wall* “Take me to the hospital.”

Lovell: “I was born for politics. I have great hair and I love lying.”

Isabel: “My life isn’t as glamorous as my wanted poster makes it look.”

Princess Maggie: “Not trying to brag or anything, but I can wake up without an alarm clock simply due to my crippling and overwhelming anxiety, so…”

King James: “You can de-escalate any situation by saying, ‘Are we about to kiss?’ Doesn’t work for speeding tickets, by the way.”

Killian: “Fool me once, I’m gonna kill you.”

Sir George: “Physically, yes, I could fight a bird. But emotionally? Imagine the toll.”

The Bishop: “I’d like to offer you moral support, but I have questionable morals.”

Lord Percy: “If you can’t beat them, dress better than them.”

Lady Percy: “You seem familiar, have I threatened you before?”

You can find The Last Fire Eater on Amazon right here, on Smashwords here, and on Goodreads here.